Examining a physical system such as an industrial facility or an establishment system by a trial and error method, breaking it down and re-designing can be extremely costly and long process. Instead of this, making calculations on a model which is a mathematical equivalent consisting of equations representing the behaviors of the system may make our jobs much easier.

For example; in order to forecast where a bus whose speed is 90 km in an hour will be in 3 hours, we don’t need to get on the bus and travel for 3 hours. According to Newton’s motion law, the mathematical formula of the distance we will make is Distance = Speed x Time. If we accept the bus’ behavior as linear and doesn’t change in time (doesn’t slow down, doesn’t make stops, etc.) we can solve this mathematical model, and forecast that bus will be 270 km ahead after 3 hours.

We can model the operation of our work and business system similarly as well. Thanks to models we can set up with mathematical methods, we can easily see the result by only changing parameters. We can try different scenarios and perform simulations. For example; we can perform cost, profit and budget simulations in different request and production levels, and evaluate the profitability of the company depending on different scenarios. With the flexibility of Excel, we can only change a few parameters, see the results quickly, and use them in the decisions that we make.

After creating a model that can adequately represent the system, we can make analysis about the system. We can find the optimum or best solutions that will bring us closer to our desired goal with the optimization techniques. Modeling and optimization is used by private or public sector in many establishment and economy problems. Optimization is widely used by many companies that require technical business such as transportation, energy production and distribution, telecommunication, industrial production and companies that are in service sector such as banking. Many problems such as planning, scheduling, allocating work and workers, reducing the shortage, maximizing the financial yields can be solved with optimization. 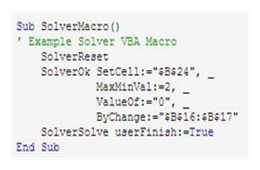 A ship company is deciding how many sailboats it will manufacture for the next four seasons. The demand is 40, 60, 75 and 25 sailboats, respectively. The company must meet all demand on time. In the beginning, there are 10 sailboats in the inventory of the company. The company can manufacture 40 sailboats in a season with normal labor and it is subjected to 400$ labor boast for each sailboat. For each additional sailboat that is manufacture over-time, labor cost is 450$. Sailboats that are manufactured on any season is either used and sold to meet the demand or put into inventory. Storing one sailboat in the inventory for a season causes 20$ of transportation cost. In conclusion, how much production must this company make in each season?

Model of the problem:


When we solve the problem in Excel